About Dreketi:
Dreketi is located in the province of Macuata on Vanua Levu and is home to some of the poorest people on Fiji. Dreketi is a district in the comprising of 7 villages all of which are located within the mid reaches and the upper reaches of the Dreketi river and their tributaries. Populations living in these areas are almost wholly dependent on fishing and subsistence as well as rice farming for their livelihoods.The largest village located along the Dreketi river is Nabavatu village which is also the centre of traditional governance within the district. Dreketi has been a slow developing district compared to a number of other districts around Macuata
ORIGIN:  Ghana
TYPE:  Forestero
CERTIFICATIONS: Rain Forest Alliance
ORIGIN: Guatemala
REGION/FARM: Lachua
TYPE: Iquitos Dominant, Trinitario, Amelonado, Nacional
CERTIFICATIONS: Organic
CHOCOLATE MAKER NOTES: Honey, strawberries, coffee and...shooting stars! Approachable and kid friendly with bright notes - good intro to craft heirloom/fine flavor cacao for anyone new.

ABOUT THE FARM/REGION/PEOPLE:
Laguna Lachuá is a large pristine cenote lake deemed a national park in 1976 and a Ramsar site in 2006. The “Eco-region Lachuá” around the lake is home to Q’eqchi’ Maya families, many of whom live off grid and rely on production of cacao, honey, cardamom, corn and other crops for their livelihoods. Cacao farmers are organized into three certified organic community associations, ASODIRP, ASOSELNOR, and K’AT’BALPOM, each with its own fermentation and drying operation. Lachuá communities have planted over 245 hectares of new cacao since 2014 and improved financial literacy in cacao production through projects supported by the International Union for the Conservation of Nature (IUCN), FUNDALACHUA, and FundaSistemas, with the shared goal of protecting the Laguna and improving their quality of life.

​
ORIGIN: Honduras
REGION/FARM: Wampusirpi
TYPE: Trinatario
CERTIFICATIONS: Uncertified direct trade, uncertified, organically grown and unfumigated
CHOCOLATE MAKER NOTES: Elegant and Smooth. Full chocolate flavor surprisingly lacking in bitterness and overt astringency for such a high %. This is Lauren Bacall in a long black gown.
ABOUT THE FARM/REGION/PEOPLE:
These beans are direct trade and organic. In the first case, that isn’t certifiable and in the second, in this case, they are not certified but organic nonetheless. These beans were sourced with care about the farmer and co-ops, premiums well above the market minimum were paid (nearly double in this case) and only the best beans were accepted. They come from a remote part of Honduras (two days by canoe) where there simply are no chemicals and they have never been used. In addition, these were shipped in and through customs with no fumigation and everything I can find about the Wampusirpi (goodness I love saying that name) district leads to the fact that the whole region is committed to organic. These are box fermented under the supervision of a local gentleman who has been doing so for the last two decades. Per his instruction the beans are checked and turned every four hours.
Origin: Madagascar
Region: Sambirano Valley
Type: Trinatario
Certifications: Organic
Akesson Single Estate Cacao from the Northern Ambanja region.  Cocoa grower Bertil Akesson's father was a Swedish diplomat in Paris before starting a trading company and traveling the world.  The family eventually settled in Madagascar in the 1970's and took over plantations on the island.  Today, these plantations are controlled by Bertil himself in North West Madagascar where the plantations are divided into four smaller estates.
ORIGIN: Mexico
REGION: Chiapas,  Sonconusco
TYPE: Trinatario
CERTIFICATIONS:  Organic Uncertified
​The Chiapanecan origin comes from Soconusco from a cooperative named Organizacion de Productores de Cacao Sostenible Rayen founded in 2016.  The core "group" consists of around 30 members.  With the help of the University they are devoted to the rescue of the heirloom varieties of local cacao under threat by the introduction of highly productive and pest-resistant "clones" as is the case in most cacao growing countries.  They do so by researching the varieties already present in their lots (which can be over a hundred years old) and by propagating the ones that are more productive/tastier/healthier.  Cacao in the region is typically a polyculture: in the cacao orchards you can find other fruits such as mamey, lemon, coconuts, pineapples, mangoes; timber-yielding trees (shade trees of the cacaos) like ceibas and cedars and tropical flower, amoung them hibiscus, ginger and heliconias.  The cacao is organically grown, however not certified as such (too expensive).

CACAO IN VIETNAM
Cacao arrived in Vietnam in the late 19th century. It remained a small crop until about 15 years ago, when development organizations began encouraging the planting of seedlings in the Mekong Delta region. While this dramatically increased the amount of cacao grown in Vietnam, it still remains a tiny share of Vietnam’s agriculture compared to its massive rice, cashew, and coffee industries.
ORIGIN: Vietnam​
REGION/FARM: Mekong Delta - Lam Dong
TYPE: Trinatario
​CERTIFICATIONS: direct trade, Marou​
From Marou: "ACT 1: FRANCE’S CHOCOLATE-COVERED FAILURE
French missionaries and luminaries brought cacao to Vietnam in the 19th century.
The famous Dr. Alexandre Yersin (disciple of Louis Pasteur, discoverer of the bubonic plague bacillus and formidable presence in Indochina until 1943) is said to have tried his hand at cacao farming Vietnam.
Let’s just say it might not have been his most successful enterprise. That or the records disappeared.
We know with a bit more certainty that a missionary, Father Gernot, planted cacao trees in Ben Tre in the late 1800s.
Administrative records from the early 20th century reveal the Lieutenant General rescinded subsidies to cacao farmers after just 17 years.
“It seems, effectively, useless to encourage this culture which has, until now, not yielded any satisfying result,” he noted in a decree dated January 24, 1907.
A few trees nevertheless remained in the Mekong Delta, where the fruit was mostly eaten fresh.
Without any significant investment or know-how, cacao remained a marginal product in Vietnam’s colonial days.
ACT 2: COCOA FOR THE USSR
The second act of the Vietnamese cacao story takes place in the bleak hours of the 1980s, when a meager trade with the USSR (and a few other Eastern Bloc states) kept the Vietnamese economy afloat. Soviet chocolate experts and their Cuban friends tried heir hand in Vietnam, but by the time the first cacao trees were yielding pods, the Berlin Wall had fallen and Russian buyers had vanished.
Once again, the farmers had no customers and cut back all but a handful of trees.
ACT 3: VIETNAM’S CACAO RENAISSANCE
Following the end of the US Embargo, International commodity traders, NGOs and foreign development programs (USAID’s Success Alliance program, in particular) saw Vietnam as a possible boon for the world’s growing chocolate appetite.
As wallets and waistlines grew in nearby China, corporate candymen hoped to cut significant cost by making MARS bars out of cacao pods grown in nearby Vietnam.
Academics like Dr Phuoc of the Nong Lam agricultural university helped create programs that supported the effort of small farmers in a number of provinces.
Government collectives threw the shrub everywhere to see what stuck. The idea, of course, was volume. Experts estimate that cultivation boomed with a peak at five-thousand tons in 2010 only to shrink as farmers turned to more lucrative crops like pepper or pomelo.
During that time, however, many of the country’s aging farmers saw cacao as a stable and promising alternative. They could inter-crop the shrub with coconut and other low-maintenance products. They could also earn extra money by harvesting, fermenting and drying their own beans.
Marou now works closely with farmers who are passionate about cacao, whose hard work is making Vietnam one of the most exciting new producers of cacao in the world.
In 2016 Vietnam was recognized as a fine-flavored origin for cacao seekers. Thanks, in no small part to the free advertising offered by Marou, cacao junkies began showing up in Vietnam looking for its distinct and spicy beans.
THE FUTURE?
Slowly but surely, Cacao cultivation is ticking up again in areas where it has managed to survive boom and bust.
It faces some formidable challenges.
Climate change has limited freshwater supplies in the Mekong Delta and created vicious cycles of drought and storm in the highlands. We’re experimenting now with a sustainable, low-impact crop grown inside a mountainous native forest.
As the first artisan chocolate maker based in Vietnam, we’re committed to finding a sustainable path forward for the farmers we now consider family." 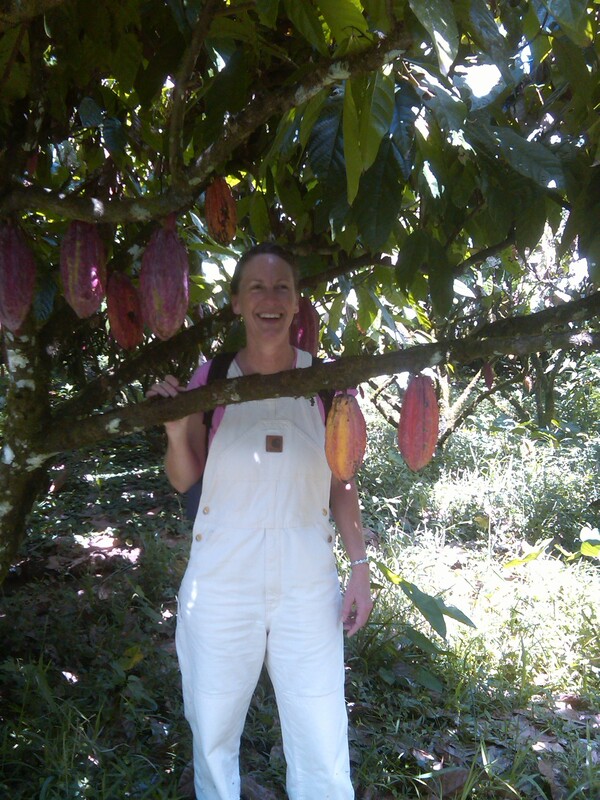 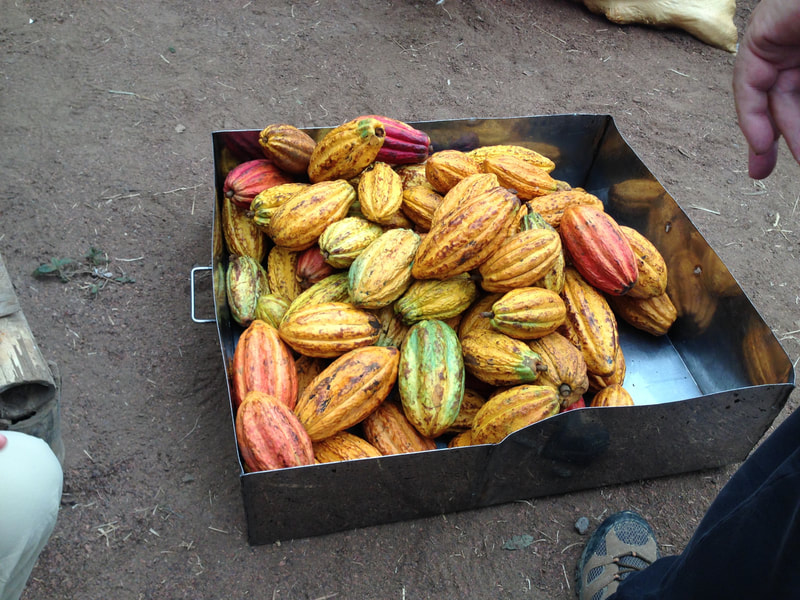 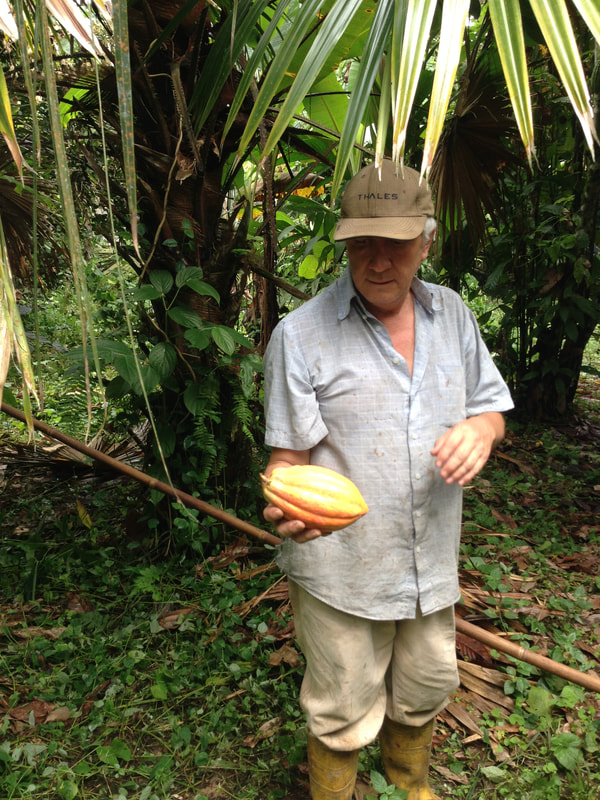 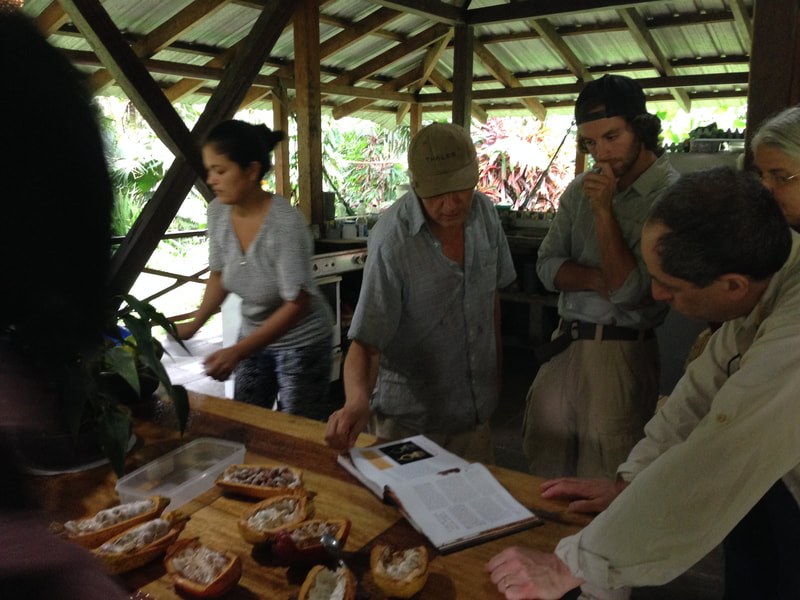 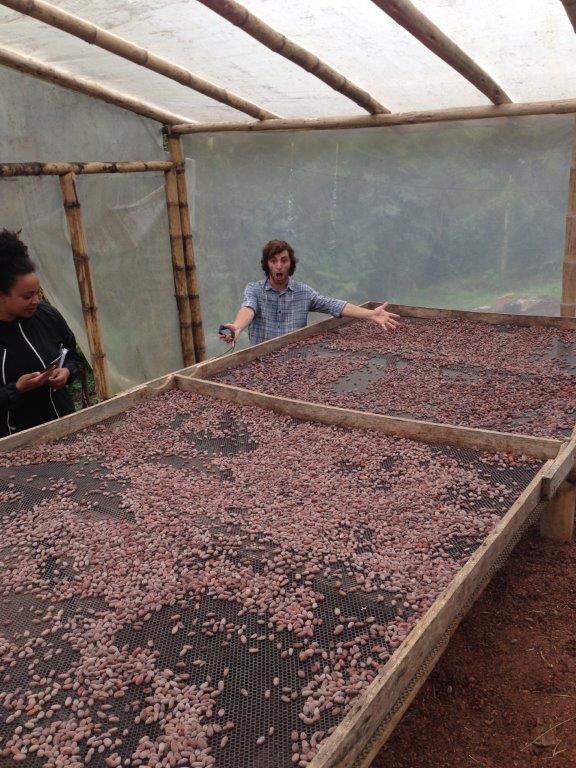 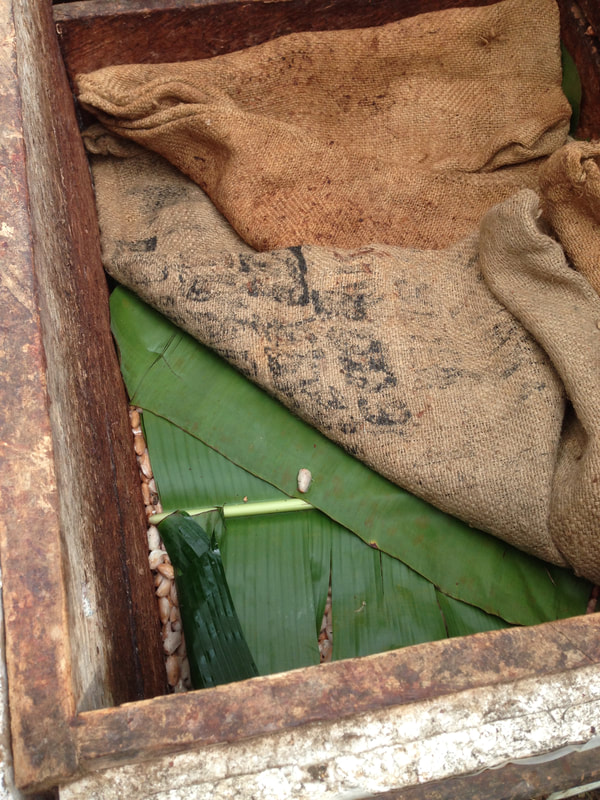 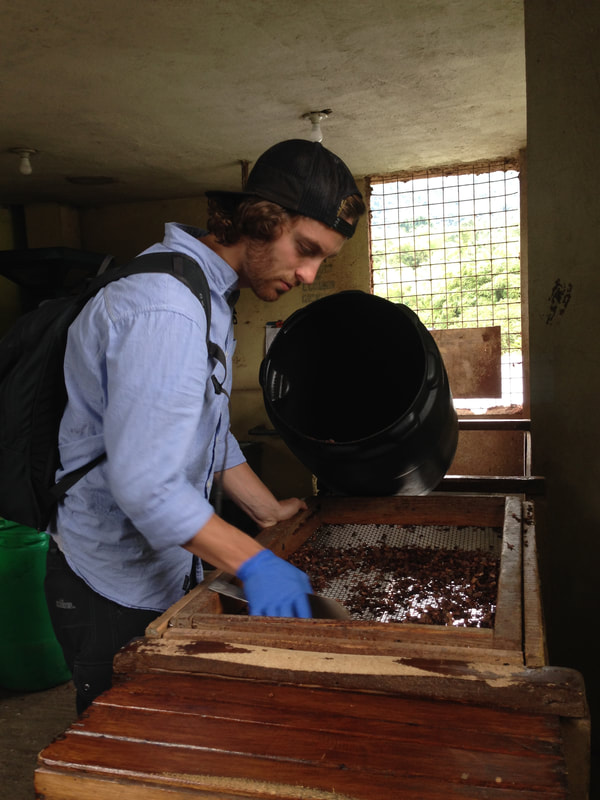 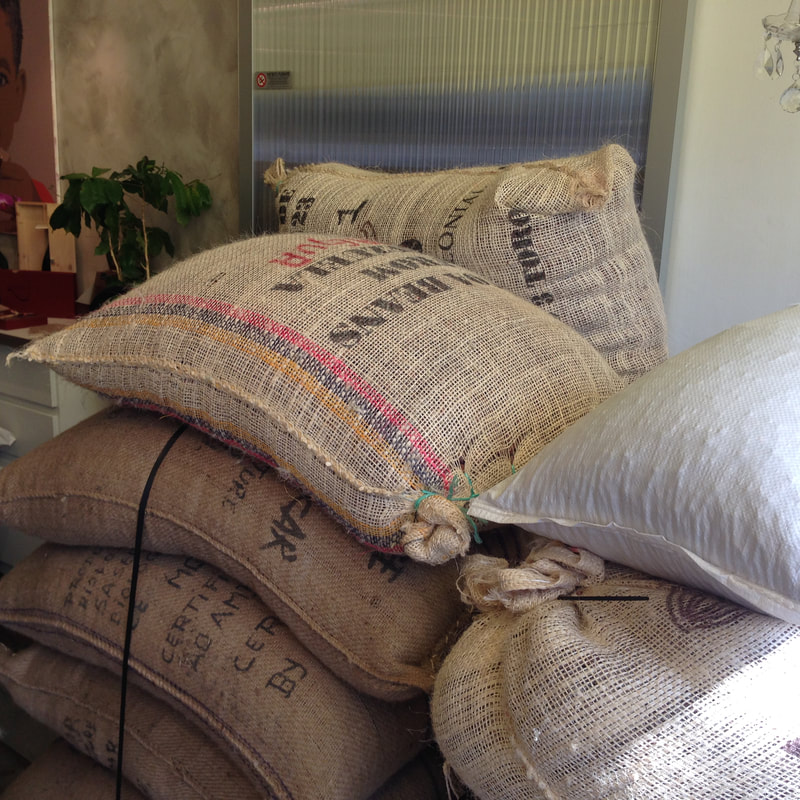 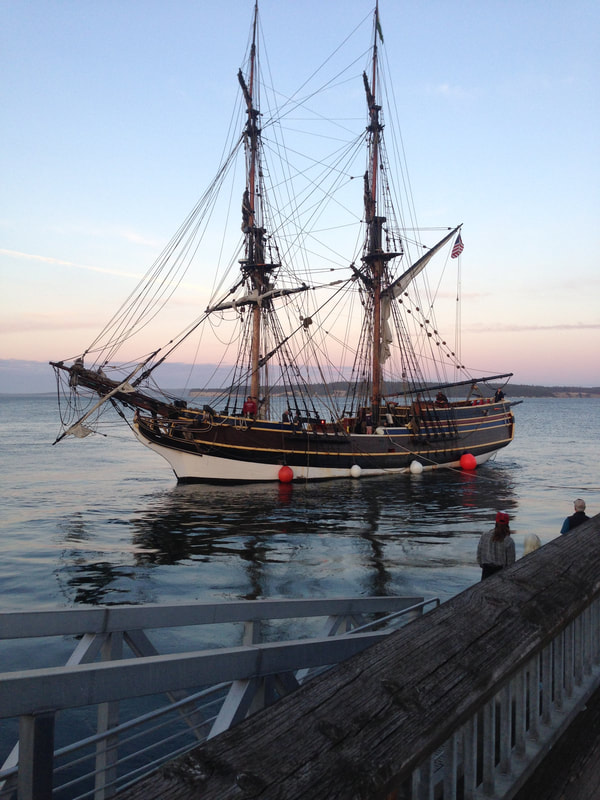 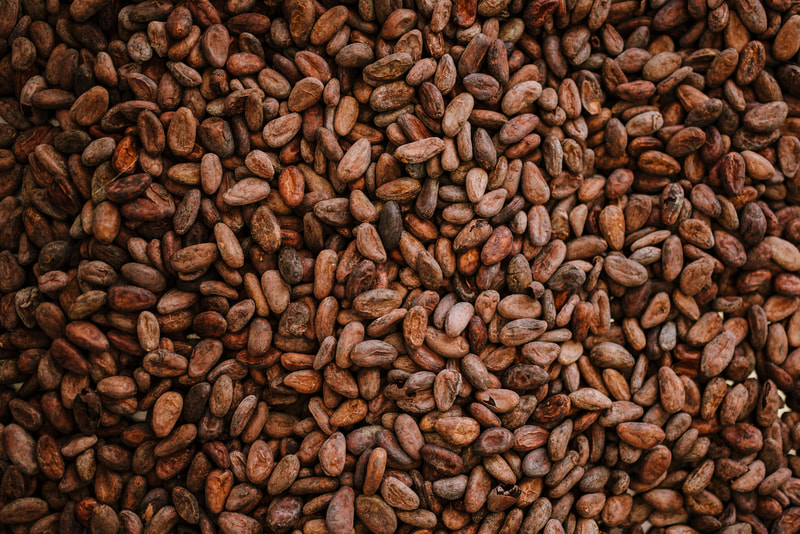 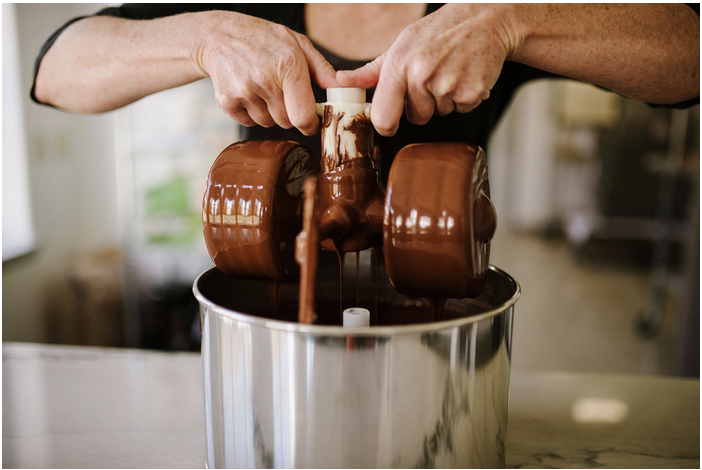 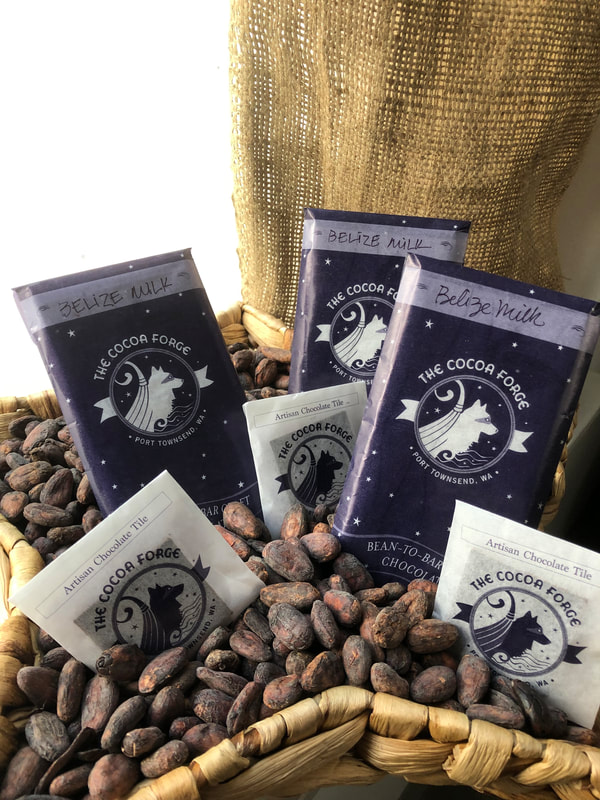